Dead Lawyer on Aisle 11 is the twenty-first of USA TODAY bestselling author John Ellsworth. Pick up a copy today but be prepared to lock the windows and doors while you’re curled up with this page-turner. The series books are all stand-alones. If you missed book six, enough background about it will be provided in book seven that you don’t miss anything. All books work this way. Enjoy! 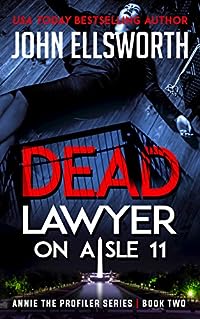 SOMEONE IS KILLING OFF LAWYERS IN THE U.S. ATTORNEY’S OFFICE

Michael Gresham is assigned to prosecuting the case against the at-large killer. When Michael’s team has tried everything else to find the killer, they turn to twelve-year old Annie Gresham to create a criminal profile. Annie, the savant daughter of Michael Gresham, gathers together all the known evidence and begins mining the data. The killer moves closer and closer to the investigators. Now everyone is a potential target, especially those who are getting the closest to making an arrest. Annie creates a shocking profile of the killer, leaving the FBI agents skeptical of Michael Gresham. The noose slips around Michael and he struggles to arrest the killer before the FBI turns on him.

Michael is put on administrative leave. He retains Joy Heavens to come to his defense. Help comes from an unexpected source when Marcel Rainford returns from his work at Interpol and joins Michael’s team.

In a shocking twist, the true identity of the killer becomes known–too late, for the jury meets and returns with its verdict. Marcel pulls out all the stops to obtain enough evidence to require a new trial. Video is purchased from an unexpected source and brought to court.

One day remains to file for a new trial and complete Michael’s struggle to be free. Will the judge buy the shocking truth? Or is Michael’s jail cell now his long-term home?