My poor baby bassets. They woke up this morning all excited about going to Disneyland tomorrow. They said they were too excited to go to school and wanted to stay home with me. NO!!! GET OUT OF MY HOUSE! GO TO SCHOOL AND I WON’T PICK YOU UP UNTIL 6PM. Actually I will pick them up at 2:30 like I always do. It seems to me they never remember just how stressful and chaotic it is the day before a trip. Hubby and I are always at the highest stress level and sometimes not that nice. I guess we couldn’t be all that bad, since the baby bassets never remember this. I did slow the car down when I dropped them off at school, so points for me!! 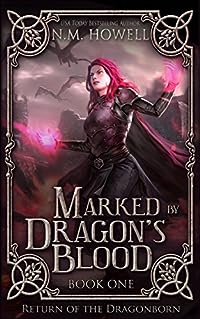 Marked by Dragon’s Blood (Return of the Dragonborn Book 1)
by N.M. Howell

“This is one of those books that keeps you up at night because you tell yourself one more chapter again and again!”

Descended from dragons. Condemned to death. Driven underground.
Andie Rogers is no stranger to secrecy. After watching her dragonborn mother get taken away at a young age, she has had to learn to use her sorcery inherited from her father to disguise all trace of her own dragon’s blood magic. Now, no longer a child, Andie must attend the University, center of all magic and government in Arvall City, to learn to wield her magic and become a fully-fledged sorcerer.

But Andie has another goal in mind.

Dreams of her tormented ancestors calling out to her have haunted her since she was a child, and Andie knows she must answer their call and discover the truth. But she must do so in the magical capital in the world, surrounded by powerful sorcerers determined to uphold the lie at all cost. If they discover that she carries the blood of the dragonborn, death with be swift and her people will never get a chance at redemption.

Will Andie risk everything to shatter the lies that the world has been fed for so many years? Will she set her people free? 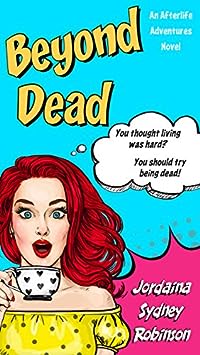 You thought living was hard? You should try being dead!

Dead less than twenty-four hours, with a job that doesn’t pay, a fashion disaster for a uniform and more afterlife rules than she can shake a stick at, Bridget Sway thinks it’s as bad as it can get. And then she finds a dead ghost stuffed in her locker.

Since the police are desperate to arrest her for murder, Bridget’s new best friend convinces her the only way to save herself from an eternity in prison is to solve the murder themselves.

With a handsome parole officer watching her every move, an outlaw ghost befriending her and two persistent mediums demanding her attention, solving the murder is not quite as easy as it sounds. And when “murder” turns into “murders” Bridget needs to solve the case… before she becomes the next dead body stuffed in her locker.

Interview with the author

What makes the Bridget Sway series so special?

I think it’s a couple of things, to be honest. I read across genres, from cozy mysteries to paranormal mysteries to a wide range of chick lit. So when I was writing the Bridget Sway series, I wanted to incorporate all of my favourite elements of those genres into the series and the characters as well.

That might sound like a bit of a strange mash up, but it blends together really well. From cozy mysteries, I stole the dead bodies and the amateur sleuthing because I love whodunnits! One of the things that can become frustrating in cozy mysteries, though, is the ditsy heroine that continually runs into dangerous situations. I wanted to make Bridget smarter than the average cozy amateur sleuth, so I gave her the sassy or snarky attitude of the strong female characters that are so prevalent in the paranormal mystery genre. I also borrowed a little of the sarcastic wit and humor as well. Because everyone needs a little humor when finding dead bodies!

And, despite her being a ghost, I wanted to make sure Bridget Sway was relatable, so I made sure she struggles with friendships and personal growth just like everyone in real life. Both of these themes are dominant in the chick lit genre. 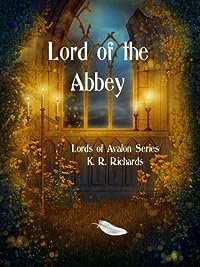 Lord of the Abbey (Lords of Avalon Book 1)
by K. R. Richards

Confirmed spinster, Lady Rowena Locke, seeks aid from Harry Bellingham, the Earl of Glaston and head of the renowned Avalon Society, a historical and paranormal Society, to find the lost Glastonbury treasures. Harry is not only interested in the treasure hidden by the last Abbot of Glastonbury before the dissolution of the Abbey, but he is also interested in Rowena.

When Harry and his fellow Avalon Society members step in to assist Rowena and her aunt on their quest, dangerous and mysterious men in brown coats and hats appear in Glastonbury. They are also searching for the lost Abbey treasure. It’s a race against time as the mysterious ‘Brown Coats’ seem to always be one step ahead of them. The Society finds more clues, treasures, letters, and holy secrets. Will they discover who the ‘Brown Coats’ are and why they are after the treasures? Can Harry convince marriage wary Rowena to trust in love and marry him?