The Reality Games by Tom Reissmann

“Tom Reissmann brings us a novel of big ideas, pulse-pounding action, and deep emotion that will keep you guessing as Max and Olivia struggle to uncover the mysteries behind The Reality Games.” -Hayden Trenholm, award-winning author of The Steele Chronicles. The Reality Games is an interactive, futuristic love story exploring the potential and dangers of artificial intelligence. 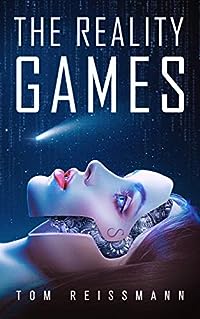 The Reality Games
by Tom Reissmann

In 2061, artificial intelligence is everywhere. Professor Max Wheeler welcomes a synthetic into his home – a construct that looks and acts exactly like his late wife, and whose presence outrages Max’s daughter, Olivia. When Olivia disappears, and a friend is murdered, Max is drawn into a dangerous web that causes him to question everything…

Are we living in a game?

In the year 2061, artificial intelligence has solved most of humanity’s problems from global warming to viral diseases, while synthetics have become impeccable lovers for humans. But there are those that resist AI technology, fearing the gradual enslavement of the human mind by an all-powerful superintelligence.

Following the mysterious suicide of his wife, history professor Max Wheeler welcomed a synthetic into his home. Programmed to help Max overcome his grief, his synthetic, Miri, is an exact physical and psychological replica of his late wife, Miriam, a fact that provokes revulsion and outrage in Max’s daughter, Olivia.

As tensions escalate between the United Continents and the Tech-Resistance Territories, Max is recruited to help locate a dangerous quantum-hacker. But, when his friend is murdered and his daughter is lured into the territories of the Tech-Resistance Army, Max begins to question not only his allegiance but also the very nature of reality itself.