Multiple-Award-winning author Andrew Ceroni has certainly given readers another nail-biter of a thriller with the explosive blockbuster, David’s Sling. Grab your copy TODAY! 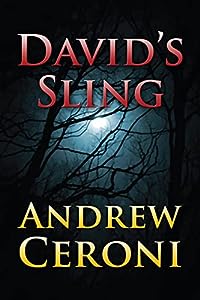 In the deep, shadowy forest of New York’s Adirondack mountains, CIA Agent Dave McClure will meet his most horrific nightmare and face his greatest challenge ever!

The CIA and its top agent, Dave McClure, have their hands perilously full. Franz Altmann, a vicious killer and a member of the German terror group, Red Storm Movement, has slipped unseen into America. He intends to bring the U.S., the world’s epicenter of capitalism and finance, to its knees in the most horrendous attack possible.

If that isn’t enough, Vassily Krasnoff, a Russian believed fatally wounded in the Alaskan wilderness by McClure’s rifle shot, didn’t die as intelligence indicated. Krasnoff emerged from a coma, and he wants revenge for the death of his brother, Leonide. Someone McClure loves dearly must die and die by the most gruesome means imaginable. McClure knows he must find and kill Krasnoff first.