Her Last Lie by Kyla Sharp

Her memory was wiped clean. Now she has to trust the man who says he’s her husband. Her Last Lie by Kyla Sharp is a gripping psychological thriller with a killer twist. Perfect for fans of Freida McFadden, K. L. Slater, and Daniel Hurst. 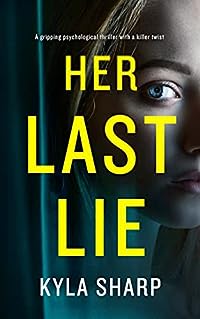 Her Last Lie
by Kyla Sharp

Naomi wakes from an accident with no memory of her previous life. A stranger to her, Joel, claims to be her husband, and Naomi has no choice but to believe him.

Joel keeps Naomi isolated and will only drip-feed her clues about the past. He says he’s just following doctor’s orders – Naomi has to take it easy or she could be overwhelmed.

But Naomi can’t help feeling there’s something off about Joel and the wonderful life he claims they had together. And how did she get injured and lose her memory in the first place? And who is the strange woman who is stalking her?

Naomi begins to suspect she’s in terrible danger. She needs to fully remember her previous life – and fast.

When she finds some posts she made on Instagram, she realizes the clue to her identity may lie on social media. But are those posts even true? Or was that Naomi presenting a picture-perfect version of herself which has no basis in reality?

Trapped in a web of lies and unable to trust even herself, can Naomi figure out the who she really is before it’s too late?