Magic is returning. And so are humanity’s ancient enemies. Black Hawk Down meets the Lord of the Rings! From former army officer William Stacey comes The Dark Elf War series, an exciting new blend of urban fantasy and military adventure. If you like Weston Ochse, Myke Cole, Michael Anderle, and Bob Meyer, you’ll love the Dark Elf War Trilogy. Ranger, book three in the trilogy is also available now. Grab your copy today! 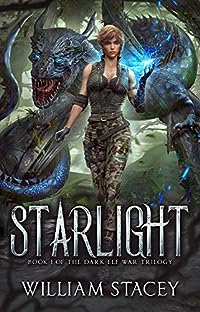 When University drop-out Cassie returns to her small rural town, she’s certain she’ll spend the rest of her life in the remote wilderness of northern British Columbia. No future, no hope. But everything changes in one storm-filled night.

Because now, Cassie can wield magic.

Alex is Special Forces. Highly trained and superbly motivated, he’s part of a secret unit tasked with inter-dimensional travel to another world — a deadly world filled with monsters of myth and magic. But Alex and his team have opened a door they never should have.

And something has followed them back.

Now, Cassie and Alex must join forces in the opening salvo of a secret war, one we can’t afford to lose.

A year ago, the dark elves breached the interstellar veil between our world and theirs, slaughtering scores of innocents in the first battle between magic and technology.

In the year since, Elizabeth Chambers has trained alongside Cassie “Starlight” Rogan in the Special Forces unit known as Task Force Devil. Their mission: to monitor the interstellar portal where the dark elves forced their way into our world.

Elizabeth — one of only two people on the planet who can wield magic — struggles with finding balance between her faith and her new powers, but soon she’ll have to fight.

Because in a single night of fire and death the dark elves have returned.

And they have sinister plans for humanity.