Daphne: My existence is one of constant danger. I am the oldest, the leader of a race of immortal warrior women. We are the stuff of myth and legend, with the ability to shift into powerful beings, The Drakaina. But now we are being hunted by Apollo’s Champions, our greatest enemy from times long past, who we had thought stamped out of existence over a hundred years ago. The Drak Defense Co. series by Raven Lovelace is an un-putdownable series you won’t want to miss. Grab your copy TODAY! 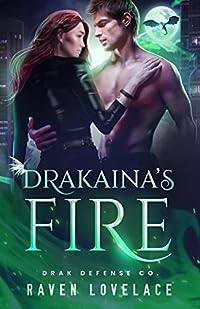 When General Everett DuBois enters my life, he turns everything upside down. His very presence ignites a primal fire within me, but I don’t have the time to give into it. My sister Michelle has just been captured, our enemy is back from the dead, and for the first time in twenty-five hundred years, the continuation of my people’s immortal lives is on the line. And yet, the mating call beckons me… and my Drakaina is determined to answer it.

Daphne Drak is the defense contractor I’m assigned to investigate, and I never fail at my assignments. All part of making sure the taxpayers are getting what they paid for. At thirty-five, I’m the youngest General in the history of the armed forces. I’m used to getting my way. But this woman won’t even return my calls, even as she sets my blood on fire with her emerald eyes and luscious curves.

Daphne completely derails not only my assignment, but my life of military discipline, schedules, and routines. You can run all you want, Daphne. I WILL catch you.

I’m the first Drakaina Warrior in history to ever allow myself to be captured, what’s worse than that? Oh right, my mate was part of the group who captured me and personally conducted painful experiments on me. Now he’s working for us at Drak Defense Co. and has got everyone convinced that he’s a victim here too.

It’s bad enough that my Drakaina starts drooling and begging me to release his inner dragon everytime she sees him and I can’t help but gawk when he puts on those damn glasses. I’m a sucker for a strong man in glasses, but my Drakaina is not always right. Just because this man may be my mate doesn’t mean that I have to claim him.

First I’m kidnapped by a terrorist group from my place of work at the National Institute of Health and forced to work hidden deep underground to synthesize some sort of serum to control a beautiful Dragon that they are keeping chained up down here. How these buffoons managed to capture a real life Dragon I’ll never know.

Since my release, I’ve been working with my rescuers to stop these maniacs. When the woman of my literal dreams walks into my lab with her striking sapphire blue eyes and gorgeous smile, not to mention her sinfully taut and curvy body… What was I talking about again… ? Oh right! Michelle comes in and just starts raging at me that I’m a spy sent to destroy her family. I can’t seem to catch a break. All I want is to help the women of Drak Defense Co. defeat our common enemy and maybe get Michelle to agree to a date with me. Is that so wrong?